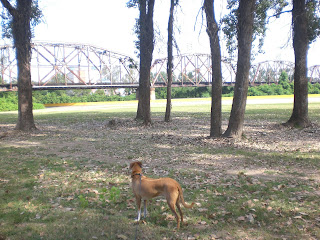 " We talked about the park and he was very diplomatic about how it is important and how will be good for the city. When he spoke at the beginning he talked about Shreveport being 'a hallmark of a progressive place to be.' I mentioned that a dog park would be instrumental in that."

McCormick said he walked away from the meeting with the notion that the dog park was going to happen, but the question remains WHERE? and WHEN?

"I think it went real well, and we are on the right track," he said.

Apparently there is some talk of a MASTER PLAN that I can not get to the bottom of at the moment as I am working away from Shreveport. However, efforts continue with the Veterans' site as I received news today from local activist Jason Scott about re-vamping an existing non-profit organization dedicated to this once glorious park that exists today in disarray.

Thank you for your continued interest and emailed suggestions on our dog park efforts!
Posted by Dogblogger at 7:23 PM

Come to think of it, this MASTER PLAN could be the one Wachtel showed me that has all sorts of goodies and boardwalks and stuff but this would surprise me because the biggest argument against a dog park along the river is the FLOODING...maybe this is a RE-MASTERed plan...let's hope.

hmmmm, a secret master plan? Surely the city will let us see it!

Ask and ye shall receive