Bark parks in the news 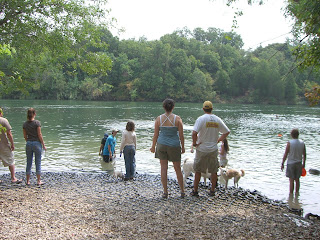 Please fwd the online petition to as many Shreveport people as you can.
Posted by Dogblogger at 7:38 PM No comments:

Red River Trail,
originally uploaded by jujuhoffpauir.
When I talked with town councilman Michael Long over the weekend about the dog park and Hamel, he suggested I call Jason Scott. So I did.

Scott believes the great river front area that stretches from downtown Shreveport to 70th street has the potential to whip us into shape. A healthy, vibrant place where locals and visitors alike ride bikes, skate, play Frisbee golf, meet fellow dog owners in the leash-free area dog park, eat lunch at the café on the river, and wade at the beach, is how he envisions the great park of Hamel.

Scott is an avid biker but is currently recovering from an injury. He said that one day (about four years ago) he woke up and realized that the trails and the park were not going to clean up themselves. So, Scott and friends began to clear the trails from poison ivy and fallen limbs, trash, and river debris, and continue to do so today (but not lately due to the injury and the heavy rains).

According to Scott, birdwatchers use the trail, too.

“How else are you going to see a flock of pelicans in Shreveport?,” Scott asked. “When you’re out in nature utilizing the trails.”

Pelicans are my favorite birds! Pelicans flock to Shreveport? Now I have something else to look forward to.

Scott personally patrols the area known for being shady and discourages lewd behavior from folks he grows suspicious of by simply asking them questions about what they are doing on the trail or on the beach or parked in the parking lot. He has had the local news team come out with hidden cameras to capture such interrogations and from the sound of it, this footage could be somewhat entertaining and/or disturbing.

His message to me was that we need to take back our parks! Progress has been made, but more can be done.

Scott believes a dog park community could only be a positive addition to the river front area.
Posted by Dogblogger at 9:55 AM No comments: 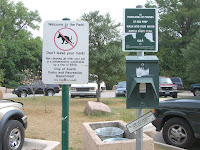 "SPAR believes that a dog park would be a great addition to our park system and would offer an amenity that we do not currently have in our area. A development such as this requires capital funding and would likely have to be part of a future bond election. Mass public interest is one area that a bond committee uses in determining what projects will be part of a bond referendum and the effort you have underway will be helpful in proving that there is a public interest. Also, you would already have an advocacy group established to encourage voters to pass such a bond issue. Thanks and please keep me updated on your blog and progress."
Posted by Dogblogger at 3:35 PM No comments:

Copy this address link then paste into your clean browser window

Reddy on a rainy day 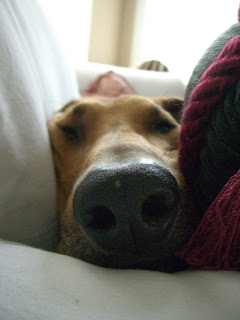 Posted by Dogblogger at 1:10 PM No comments: 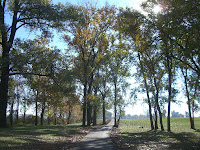 Today's headline in the Shreveport Times

is interesting to me because I am from Austin and last year I moved to Shreveport. The article talks about the young professionals' flight from their hometown of Shreveport for many reasons, including a lack of career opportunities and social amenities, for cities that offer a more appealing lifestyle. I moved from Austin to Shreveport for opportunities in the film industry. I had changed careers, and it was more advantageous for me to start here from the bottom and work my way up rather than do this in Austin.

I have a fierce loyalty and love for my hometown of Austin but these days the traffic is horrible and the property taxes are depressing. Now that I am living and working here in Shreveport, I can see potential here. My parents remind me that when they moved to Austin in 1970, the population was that of Shreveport's today. The beautiful and bustling hike and bike trail in downtown Austin today was a nasty riverfront area then. Recreation along Town Lake (now called "Lady Bird Lake") helped revitalize the downtown area.

A leash-free area at Hamel Memorial park could help increase recreational activities in the downtown area. Great amenities for a community that is trying to lure young, healthy professionals!
Posted by Dogblogger at 8:43 AM No comments:

Check out this video hosted by Gary Burghoff aka "Radar" from MASH!

Posted by Dogblogger at 4:23 PM No comments:

Try this one on for size

How about Hamel Memorial DOG park?

Hamel Memorial Park is off Clyde Fant Parkway. On the Red River and river trail, the spot is ideal because it is a big open space, it is by the water, it already has infrastructure in place (entrance & parking), it is at the end of the recreational trail that can end up as the destination spot for dogs and their owners.

I read in the Times that the area has problems with incidents of indecent behavior. A dog park eliminates that problem!

Some additions to the dog park may include a hose for watering off sandy dogs (and their owners), poop bag dispensers, trash cans, and perhaps a fence of some sort. A posted sign with city ordinance stating owners must keep dog under control, pick up poop, state potential fines, etc.
Posted by Dogblogger at 12:16 PM No comments:

I miss the dog parks from my hometown of Austin. After I adopted my big mutt, I discovered there were 12 dogparks in the city! The first one I took him to, Red Bud Isle, ended up being our favorite. The "island" was a small park where my dad used to take me and my brother fishing when we were little. Off a small parking lot from a low-water bridge, Red Bud Isle sits below the dam between Lake Austin and Town Lake (I guess now "Lady Bird Lake"). An old dirt trail winds around the island through thick trees. The last time we went fishing there was when the island seemed to be invaded by moccasins and shady-looking bums.

But sometime in the years between my youth and adulthood, Red Bud Isle was designated a leash-free dog park. Every time I take Reddy there, I am thrilled that this beautiful island is being properly utilized! It feels safe there now, and dog owners really are the best stewards of the place. Dispensers with poop bags are used, and volunteer clean-up and beautification days can be fun.

I met some good friends there!
Posted by Dogblogger at 11:44 AM No comments: 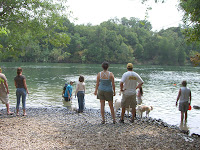 An off-leash area can benefit the community in many ways
• Groups of dogs and owners can revitalize little-used areas to socialize
• Dog parks foster community feeling -- dog park users get to know each other well
• Dog parks are desirable neighborhood amenities for newcomers
• Dog parks keep the animals away from children and people who don’t like them
• Leash-free areas promote responsible pet ownership
• Dog parks provide a tool for enforcing dog control laws
• Dog parks promote public health and safety since the dogs who use the park must be licensed and vaccinated
• Dog parks help keep other public spaces free of feces
• Well-socialized dogs are less aggressive towards people and other dogs
• Off-leash dog parks provide a place for dogs to socialize with each other, getting the physical and mental exercise they need to be good companions and
Posted by Dogblogger at 11:34 AM No comments: